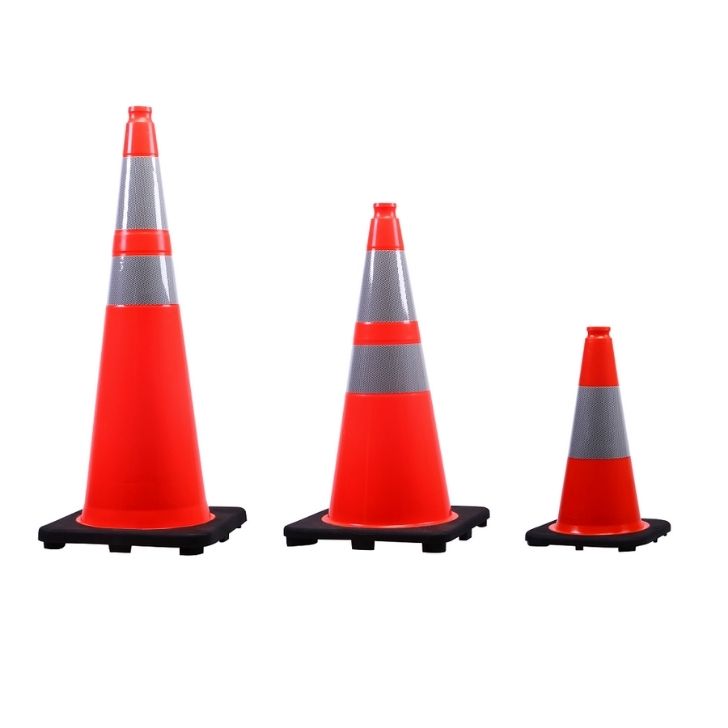 Road workers use traffic cones every day to help direct drivers through potentially hazardous construction zones. But, while this is a common practice, there’s one aspect of this process that goes overlooked by many beginners—the idea of strategic cone placement. How we choose to arrange these tools across a job site can greatly affect how drivers and other members of your team respond to traffic. As such, it’s something that every worker should be conscious of during site setup and takedown. This is what to know about cone placement and its overall importance in establishing a safe work zone.

The Importance of Strategic Cone Placement

Believe it or not, traffic safety cones aren’t as effective on their own. Though their presence on a job site is enough to indicate to passing drivers that work is going on, placement is what allows them to direct the flow of traffic. Positioning them in strategic ways makes it easier for road construction professionals to clearly tell drivers where to go—and to do so in the safest possible ways. So, this, in combination with instruction from traffic flaggers, is what ultimately increases the safety near and around the work zone.

But it’s not enough to understand the importance behind conscious cone positioning. In fact, it’s also crucial for roadwork professionals to know the different factors that can influence optimal placement. After all, no two job sites are going to be the same—and it’s up to you to identify key differences as well as how that affects your processes. These are a couple of the main considerations for placing traffic cones around a job site.

Size of the Work Zone

If you’re going to be working on a larger construction site, it’s only natural that you’re going to need more cones to accommodate it. However, this also means that you’ll need to rethink how you lay out your cones. As a general safety standard, the first few cones are required to be placed about 250 feet from the official start of the construction site. These cones are positioned in a tapering pattern that slowly forces traffic into the lane farthest from the work being done. Should your site be larger than one lane, the pattern will need to account for this as well.

The Amount of Traffic

The amount of traffic in your area and how fast it’s going can also have an impact on how you place your cones. This is because the cones themselves are often switched out to accommodate the road’s speed and driving environment. For highways, workers must use cones taller than 28 inches with higher reflectivity on the collars to ensure the cones offer greater visibility at nighttime, providing drivers with notice. This also means that cones will need to be placed in a way that provides additional cushion space and give drivers more time to slow or stop.

However, the most important thing to know about cone placement is how to actually do it. Though you’re required to adhere to specific standards, it’s only through practice that you can effectively set them up for yourself. Here are a few tips for you to keep in mind.

Use a Tapering Strategy

As previously mentioned, a tapering cone pattern is crucial for blocking off a lane of traffic while indicating as such to the drivers ahead of time. This is what helps them notice their lane is disappearing and provides them with a bit more time to react to it. To do this, walk about 40 paces from the edge of your construction site and place your first cone along the shoulder of the road. Take 10 paces back toward the site, then walk three feet into the road, when it’s safe to do so, and place the second cone. Repeat this process, taking more steps into the road with each cone, until you place your last cone along the edge of the lane.

When done tapering your cones, go back and make sure that they’re spaced out evenly. Doing so ensures that you’re creating a consistent barrier for traffic to follow and that there are no gaps where they can mistakenly squeeze into the work zone. The optimal distance for this is about 20 feet apart from cone to cone. It’s also important that you maintain this distance between cones even across the length of the jobsite.

Check Your Work From a Driver’s Perspective

Before officially starting your work, you also want to go back and check your cone layout from the driver’s perspective. Is the transition clear enough for them to understand? Do the cone arrangements correspond to what your construction signs are saying? Asking yourself these questions from the driver’s point of view will allow you to pick out any issues with your cone placement and patterns before they can become problems. It’s important that your cone alignment makes as much sense as possible so that drivers are less confused and more likely to follow it.

Reposition Them Throughout the Day

However, the work doesn’t end there. This is because you should still be checking on your cone placement periodically throughout the day. It’s common for cones to get scuffed up, knocked over, and pushed out of alignment by traffic or weather. As such, it’s up to you and your team to return them to the proper place. Otherwise, you risk a breakdown in communication between your flaggers and the drivers passing by. Marking where certain cones were placed ahead of time can greatly help with this by telling you where they should be—without the need to re-measure.

Traffic cones and their placements are crucial components of any type of job site. That’s why, at Traffic Safety Zone, we seek to not only provide our customers with quality construction traffic cones, but also with the knowledge of using them most effectively. Each of our products is constructed to be compliant with all official OSHA standards and durable enough to withstand the stressors of several jobs to come. For more information on our extensive inventory of traffic safety items, feel free to give us a call.

Shopping Cart
There are no products in the cart!
Continue Shopping
0